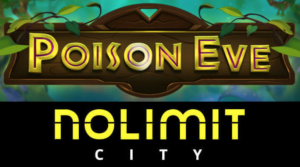 After a successful 2019, No Limit City are on a roll in 2020 having recently released Poison Eve, an enchanting tale of magical powers and potions and a whole host of exciting features leading to wins of up to 2,000x your stake on a single spin.

Poison Eve is a five reel, twenty payline video slot, play across all devices including mobile from 20p up to £100 per spin. The slot is highly volatile with an RTP of 96.08%.

The screen is predominantly green with blurred forest trees in the background. The reels are set in a frame of branches with the infamous poison ivy entwined. A beautiful female wizard is dominant throughout the game, if she appears in full view on reel one this will trigger one of the bonus features.

No Limit City are famous for adding the maximum ways to win on a single spin, Poison Eve continues the trend. All features in the game offer just that, wins can be as much as 2,000x your stake.

The Wild is a vine leaf symbol, it can only land on reels two, three and four, if it does, it will expand fully to cover the whole reel. If you are lucky enough to have all three reels wild and Poison Eve symbols fully expanded on reels one and five you will be awarded the maximum win.

The Liquid Magic feature is triggered if the Poison Eve symbol lands on reel one in full view, all poison bottles which land in the spin will transform in to Poison Eve symbols. The bottles can land stacked, a full screen of Poison Eve symbols could be possible leading to a win of 2,000x your stake.

The third feature is the Flower Power Free Spins feature, by landing only one scatter in the Hot Zone will trigger a horizontal bar offering 4, 6, 8, 10 or 12 free spins where one will be randomly picked.