2016 was a weird year to be a new online casino, at the time, newer sites were regular, but far less frequent than they are now, and the most established sites had been carving out their place in the industry for a decade or two.

Two years later, and the scene is incredibly different, a huge influx of online casinos, including those such as Kaboo and PlayOJO which found immediate popularity and jumped a few rungs up the ladder right off the bat, means that it isn’t just the long-term sites that need to be battled against for superiority any more, there’s new faces that need to be surpassed too.

So, for a site like Wixstars, which was released back in 2016, it’s a strange situation, and it would be easy for this site to get lost in the shuffle when you consider the huge changes the industry has seen in the last couple of years.

However, that is not what has happened, in fact, Wixstars has developed quite a reputation for itself in the past few years, and now enjoys a decent customer base.

It’s all about evolution if you want to survive in this industry though, a site needs to change to keep up with the times, while always offering enough content for their players, is this something that Wixstars appears to be capable of accomplishing?

At the time of writing, there’s striking imagery on the Wixstars site including the famous cowboy from the Dead or Alive slot in the banner on the top of the homepage.

It can probably be safely assumed that the cowboy will remain there for the foreseeable future, as the ‘S’ in the Wixstars logo is designed to look a lot like a Sheriff’s badge, and it’s unlikely that was a coincidence.

There’s a lot of colour involved here, with various designs all down the homepage that also includes thumbnails to popular games, information on promotions, and more.

There’s probably a few too many colour schemes, with each different section of the homepage being an entirely different colour, but each part looks nice individually, even if they are a bit much for the eyes to deal with when combined.

It is always nice to feel looked after at an online casino, and that’s something that Wixstars certainly does for you, with the Reality Check feature, you can activate this feature and it well let you know how long you’ve been playing, so you can set a timer, and be snapped back to reality when you need to, so that your concentration is not taken fully by the games you’re playing.

A genuine effort to help vulnerable players keep on top of their gambling, this is something it would be nice to see more online casinos offer in the near future.

There’s an interesting selection of games on offer at Wixstars, it’s a decent number, and mostly top-quality games, but the big difference between this and other sites is the combination of software developers, which offers varied and wide-ranging choices when it comes to games.

Wixstars is a solid site that manages to feel different from the average online casino in terms of both design and the games on offer, while still feeling professional and welcoming.

A fair option if you’re looking for a new place to play. 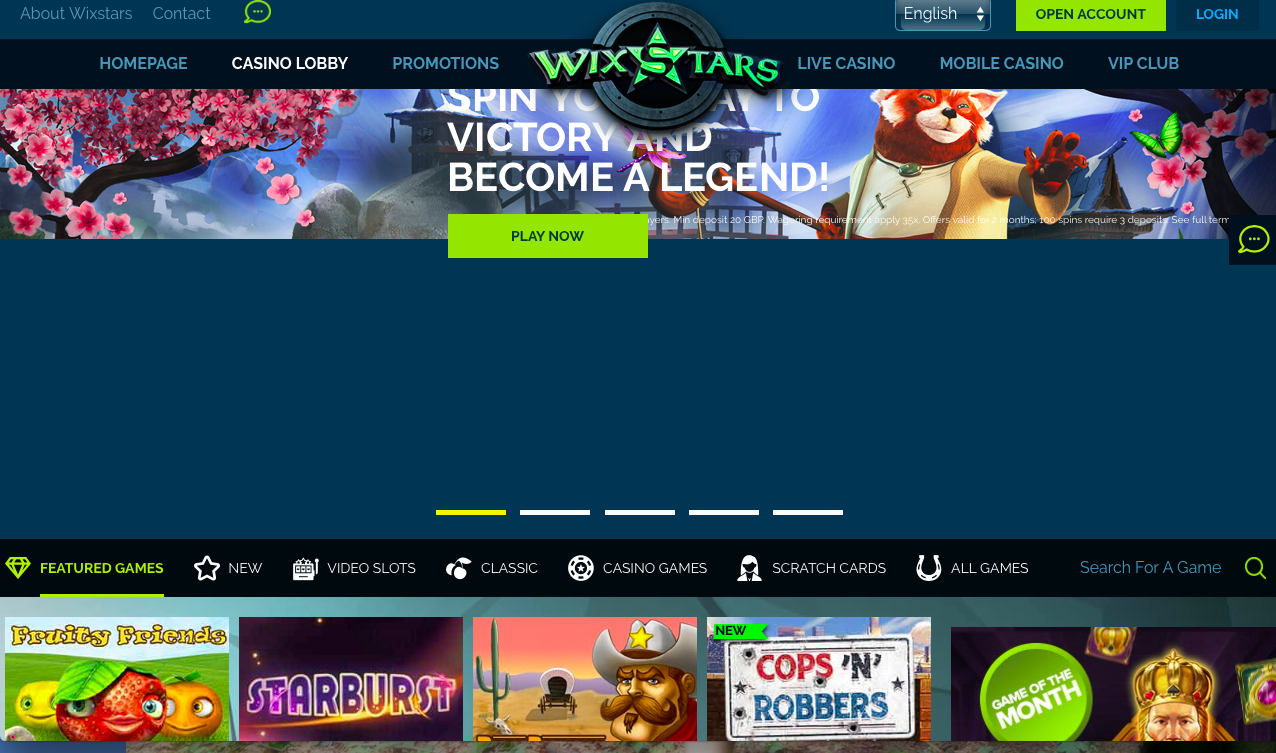 Companies that own this site : Aspire Global International Ltd, Brightnet