The iGaming world seems to get smaller and smaller as operators in various parts of the industry start spreading out to try and have as much as they can of the lucrative customer base.

With the increasing popularity of online casino play amongst players, there has also been a huge influx in the number of online casinos which exist, and that has caused some operators to slide over from other parts of the iGaming world, like online bingo.

A fair few bingo sites have broadened their horizons and set their eyes on the casino world, and one of the higher profile sites to do so is Wink Slots.

From (unsurprisingly) the people that bought you Wink Bingo, Wink Slots is a site with a lot of potential, as long as enough care has been taken to separate it from the operator’s bingo options, so it can stand alone as a good online casino.

It’s certainly been done in the past, big companies like Gala fairly comfortably stride the line between bingo and casino play, but there’s also been many which have been less successful.

So, is Wink Slots one of those sites that is going to impress? Or is this just another bingo site that is trying to do too much with not enough?

It’s tough to get the design right for a different site under one brand, Wink Slots has to clearly be a part of the Wink Bingo network, but also needs its own personality in order to stand out.

Not a bad job is done of accomplishing that here, with the logo and colour scheme being similar, but there being enough difference within the layout and design to mean the two feel like separate entities.

Unfortunately, not enough care seems to have gone into actually making the casino look good, so Wink Slots is a little disappointing in terms of design.

The main problem is that there simply is not enough going on here, most of the site is white, the thumbnails on the home page are numerous, which is great for navigation, but also seems to make there feel like even less design is present at the Wink Slots site.

This is not an unattractive site in any way, but that’s mainly because there is not enough going on to make it unattractive, what it is, is boring, and somehow, that feels worse than it being ugly!

The bingo world relies much less on offering a range of software developers, so it is when it comes to the selection of games on offer that most slip up when trying to make strides into the online casino world.

Wink Slots seem to be aware that there needs to be a collection of software developers supplying the titles, but with games coming from 888 Holdings, Eyecon, IGT, NetEnt, OpenBet, PariPlay, SG Digital, SG Gaming, and Williams Interactive, this couldn’t feel more like a range of games that was put together by people more used to creating bingo sites.

Without the likes of Microgaming, NextGen, Playtech, Yggdrasil, and many others, there are gaping holes here that are likely to put off many players, Wink Slots needs more software developers supplying more games, and it needs them soon.

There are enough slots and casino games here, but you’ll find all of them elsewhere, normally in the company of better quality games.

As much as Wink Slots brags about it being “As seen on TV”, this site is likely to be a disappointment to anyone who actually visits it, Wink would probably be best off sticking to Bingo. 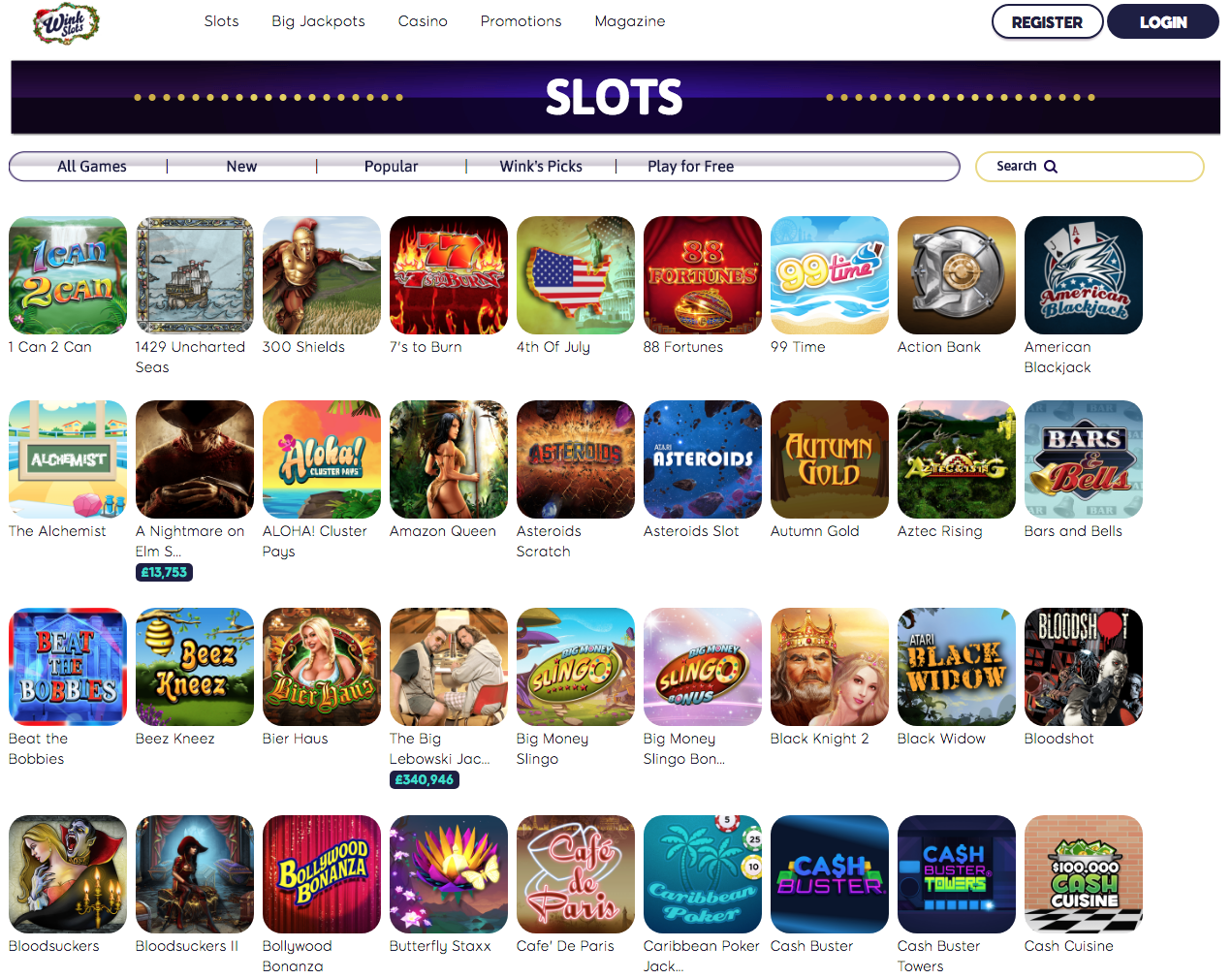