When it comes to bingo play, whether physically or online, there are few games that carry more weight and come with a better reputation than Mecca Bingo.

But sometimes being this well known for a particular kind of gaming can work against a site, which may be what has happened to Mecca. Mecca Games brings a range of casino games for players to experience, but when you hear the word Mecca, you instinctively follow it with Bingo in your head, which could possibly work against the success of the games arm of the site.

But at the same time, the online casino market is highly competitive, and having a trusted brand and a name that carries gravitas behind you can be the difference between making an impact, and fading into obscurity.

On that logic, Mecca bingo is in an excellent position to make a splash on the online bingo market, but that all depends on how much work has gone into the games site. Has the standard of the bingo site been replicated here? Or are Mecca happy to tread water knowing they will always have bingo customers and therefore draw in some to the casino site just through ease of access?

From an aesthetic perspective, this site is pretty much what you would expect, a lot of pinks (as is the rest of the Mecca brand), with the logo present to ensure you know exactly where you are.

This may seem like a bad thing, but it almost definitely isn’t. The aforementioned comfort brought to players by the brand will only be cemented by the comfort of the site feeling like the rest of Mecca’s products.

Looking great is definitely an advantage, but the design of a site also needs to be functional, and Mecca Games does a good job of this. Many of the most popular games are available directly from the homepage, which has proven popular on many similar sites, games are split into easy to search categories, and navigation of the site as a whole is very simple.

This is all to be expected, as Mecca’s Bingo site has been at the forefront of the industry for some time, whether or not the games arm of Mecca is good enough though, hinges on the games on offer.

Slots players will find more choice here than fans of other gaming types, which is not rare for a casino site, but this does mean that competition is fierce. Mecca Games appears to understand this though, and offers quite the range.

Popular slots such as Fluffy Favourites and Thunderstruck (the original and sequel) can be found here, as can TV and film themed slots like Family Guy, Sherlock Holmes, and Iron Man. There is also a good selection of new releases, including Realistic Games’ Hot Cross Bunnies, Loadsabunny (the five-reel sequel to the three-reel classic).

Casino game lovers are not left out here, although their choices are more limited. Various forms of roulette and blackjack are amongst the games on offer.

One does wonder if this selection as a whole is going to be enough. There is certainly a good range of slots, but this could also be said about a variety of other sites, and the choice of casino games is not really good enough to stand up against the majority of competitors.

How much popularity the site will find based on Mecca’s proficiency as a bingo provider remains to be seen, but one assumes that there will certainly be a good amount of customers, it is just frustrating that a few small changes could improve this site no end. 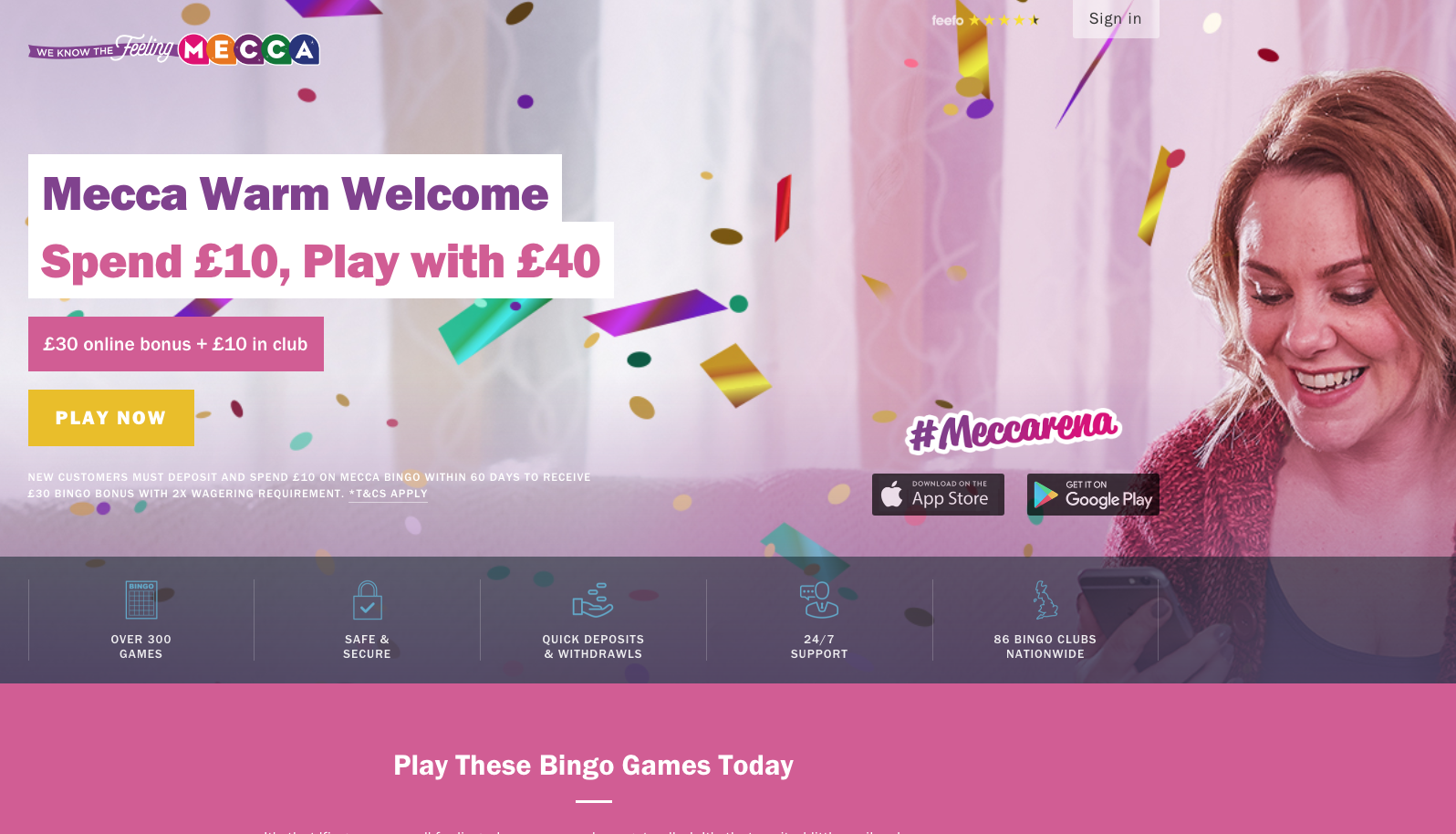 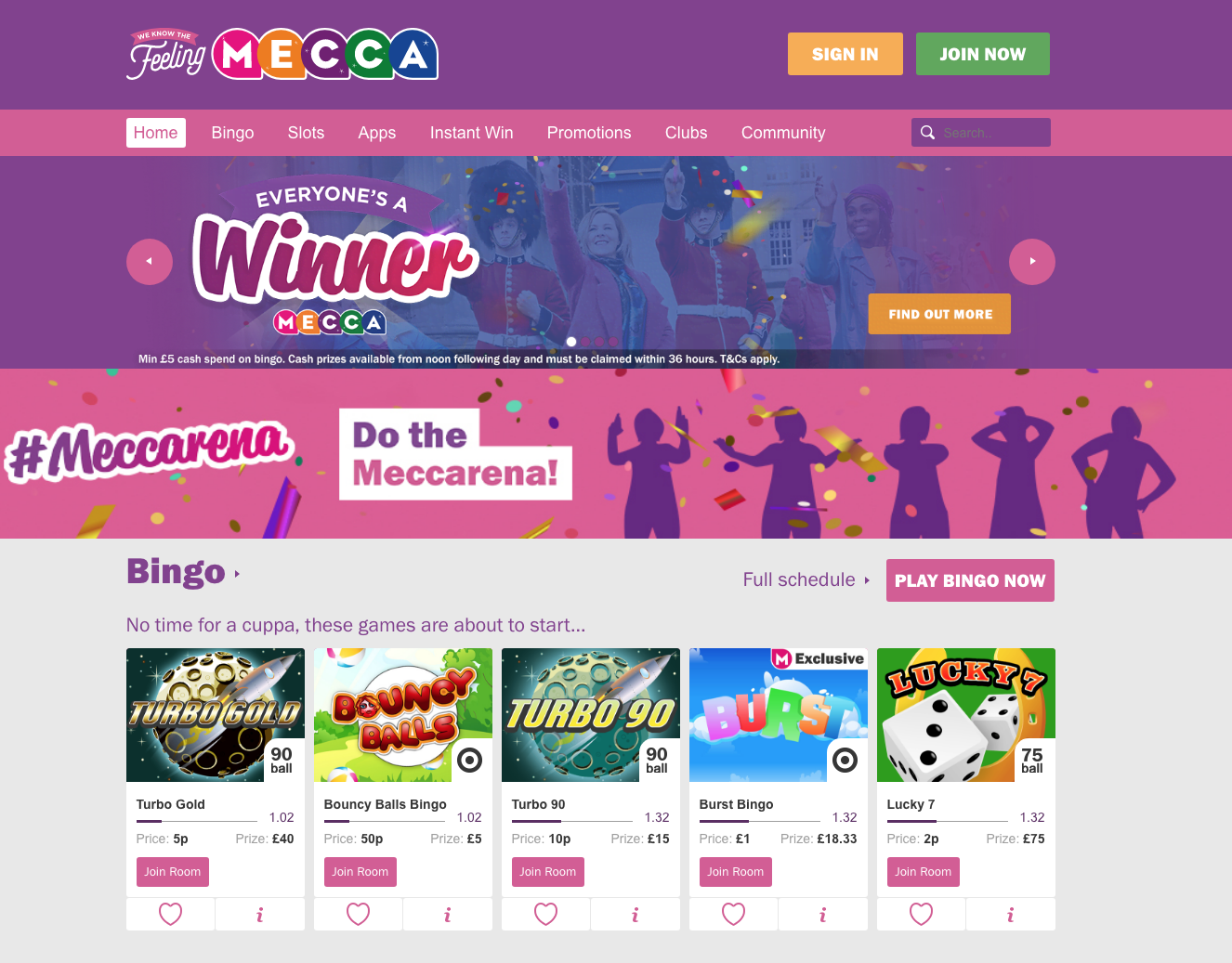 Companies that own this site : Rank Group Plc