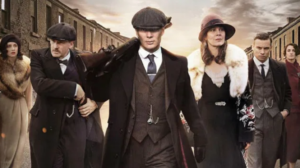 The award winning Netflix and BBC1 drama series set in the roaring twenties became a huge hit with fans around the world. Pragmatic play has sole rights to develop a range of online slots, live casino, instant win scratch cards and virtual sport products. One of the first products to feature characters from the series – an online video slot is due for release May 2020.

Peaky Blinders became an award-winning TV series after five series appeared on Netflix and BBC1. The series is loosely based around an urban youth gang in Birmingham, soon after the First World War. A worldwide following commenced and catapulted Peaky Blinders to become one of the most watched series on TV.

The series comes with a fine cast of highly acclaimed actors including, Helen McCrory, Cillian Murphy, and Paul Anderson and has won multiple awards including 2018 BAFTA, for best drama series, and best drama in 2019 at the National TV Awards.

Endemol Shine controls the rights to some of the biggest creative IP around the world, including Peaky Blinders, Mr Bean, Masterchef, Pointless and Hunted. Anil Mistry, Endemol’s Games and Gambling Director described Peaky Blinders as, ‘ one of our most iconic and promising brands’

“ It’s great to work with Pragmatic Play Limited to create brand new games with Peaky Blinders intellectual property. We are excited by the potential of this partnership.”

100% first deposit bonus up to £300, plus 50 bonus spins. (18+. New players only. One bonus offer per player. Minimum deposit £20. Bonus spins on selected games only and must be used within 72 hours. Max bonus bet is £5. Bonus funds must be used within 30 days otherwise any unused bonus shall be removed.