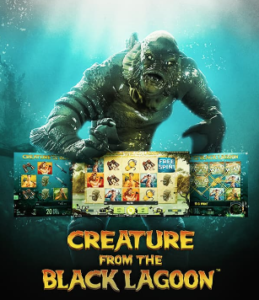 NetEnt are proud to announce their latest branded slot, Creature From The Black Lagoon, based on the 1954 cult classic film of the same name. Due for release 14 January 2020, the game is a revamped version of the original release back in 2003. Working alongside Universal, NetEnt have carefully crafted the slot game in keeping with the original film, which gained cult status amongst fans.

Based on a half-fish, half-man creature, scientists travel down the Amazon looking for what lies beneath. All four of the main characters in the film appear as symbols on the reels.

Set in a misty Amazon rainforest, a dark lagoon sits in the background. The graphics have a cinematic feel, which fits in perfectly with the 1954 movie. Game features include, Wild substitutions, Spreading Wilds, Sticky Wilds and Free Spins.

In the Free Spins feature the creature captures Kay, one of the scientists and takes her deep beneath the lagoon to his lair. Players can rescue Kay, when a target symbol appears, you get a chance to shoot the creature. The more target symbols you collect the more shots you have, a health meter at the bottom diminishes after each shot. Each shot unlocks Spreading Wilds and re-spins. By collecting the maximum amount of target symbols you will be awarded 10 free spins.

The game is all about the re-spins and free spins, you can win up to 750x your stake on each spin or re-spin with the addition of Sticky Wilds and Spreading Wilds.

18+. New players only. 1 bonus offer per player. Min. deposit £20. Max. bonus bet is £5. Bonus spins on selected games only and must be used within 72 hours. Bonus funds expire in 30 days, unused bonus funds will be removed. Bonus funds are 100% match up to £500 on your 1st deposit. Bonus funds are separate to Cash funds, and are subject to 35x wagering the total bonus, cash & bonus spins. Terms apply. BeGambleAware.