Casimba is a member of the White Hat Gaming family of online casinos and delivers premium quality casino and slot games provided by more than 70 software providers. White Hat has created a superb gaming space with Casimba, the platform is modern, sleek, with super-fast navigation, and all games are easily accessible thanks to the many categories and search options.  T&C's Apply.

18+. New players only. Min. deposit £20. Max. bonus bet is £5. Bonus spins on selected games only and must be used within 72 hours. Winnings from Bonus spins credited as bonus funds and capped at £100. Bonus funds expire in 30 days, unused bonus funds will be removed. Welcome Offer is 100% match up to £200 plus 50 bonus spins on your 1st deposit, 50% match up to £50 on your 2nd deposit. Bonus funds are separate to Cash funds, and are subject to 35x wagering the total bonus & cash. Only bonus funds count towards wagering contribution. Affordability checks apply. Terms apply. BeGambleAware.org.. T&C's Apply. BeGambleAware.

Few new online casino sites make an immediate impact. That is nothing against these sites, the high level of competition that exists in the iGaming industry means that it’s nigh on impossible to get noticed against the sea of established sites.

However, over the last couple of years there have been a few sites who have broken through immediately and gained instant popularity.

Two of these sites are Miami Dice and Spinland, which both bring together top-quality games, excellent promotions, and a unique and enticing style, which has led to them being immensely popular with players from their release.

The clever people behind these two sites have just released a new one, it’s called Casimba, and although it feels very different from its two predecessors (as they do from each other), it has the same feel of care and quality that its brethren sites emanate.

Miami Dice and Spinland may not look much like each other, but they have a few things in common, including an immersive, bold, and colourful design concept.

Casimba goes in a very different direction, favouring subtlety to put the games as the centrepiece of the site’s design.

There’s a banner across the top of the page that scrolls through various short videos that stand behind the advertising of the welcome bonus, and depict casino scenes as well as having clips from popular games available at Casimba, but there’s where the eye-catching bits stop.

Casimba falls into the successful category here, because unlike many sites which look unfinished when they opt for this kind of design, Casimba accomplishes what one assumes it is going for, making the games the part of the design that catches your attention, while the plethora of thumbnails on the homepage allow players instant access to some of the most popular games that the site has to offer.

It’s nice to see different online casinos which are not simply clones of each other, and Casimba is different to the other sites on the network, while maintaining the same level of quality.

Another positive way that Casimba follows in the big footprints left by Miami Dice and Spinland is within the selection of games on offer.

The time when a new online casino could start with a small selection of games and build up the choice over time has gone, and Casimba seems to be very aware of that, with titles coming via 1X2 Network, Aristocrat Gaming, Big Time Gaming, Blueprint Gaming, ELK Studios, Evolution, Ezugi, Greentube, Leander Games, Microgaming, NetEnt, NextGen Gaming, Novomatic, NYX Gaming, Stars Group, and Thunderkick.

The choice isn’t only in developers either, with a host of game categories including video slots, jackpot slots, table and card games, live dealer games, video poker, scratchcards, virtual sports games and more all on offer at Casimba.

Casimba is another excellent site to follow its network brothers, each of these sites clearly has time taken over its creation, to ensure that as soon as the site hits the market, it’s able to compete with the best of them, and Casimba can definitely do that! 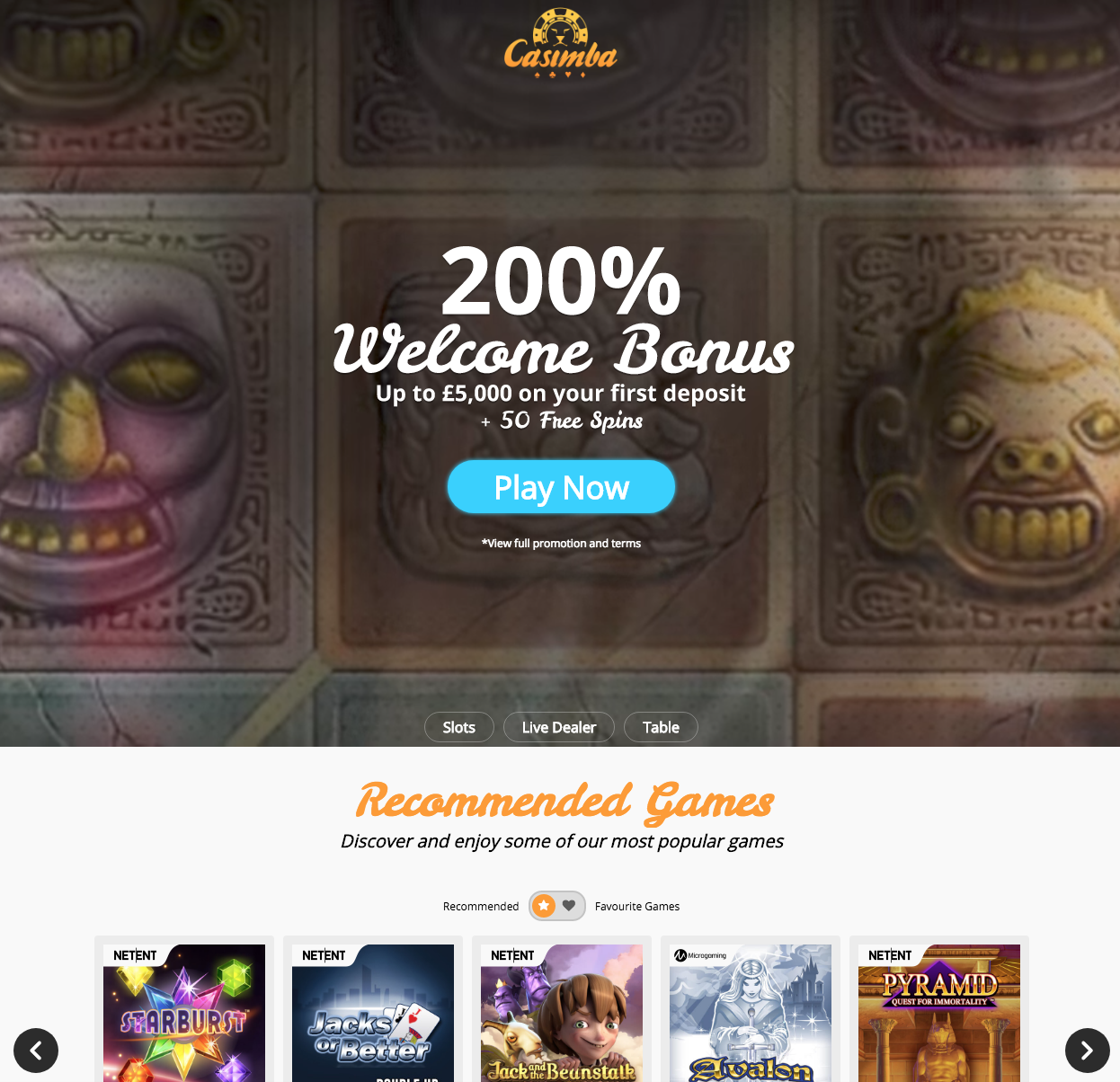 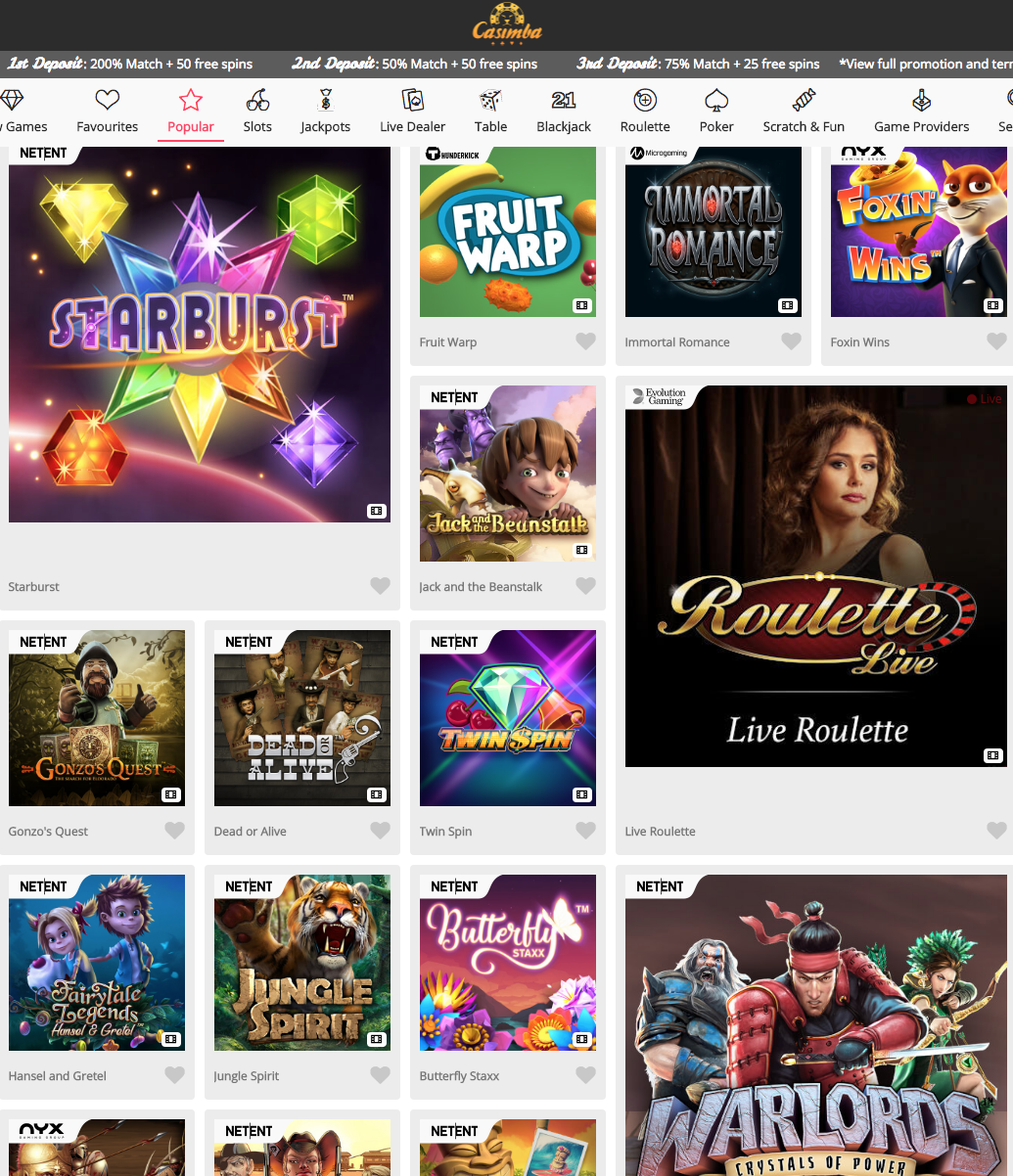